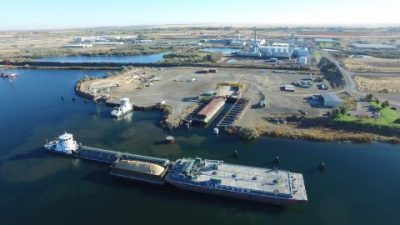 BOARDMAN, OR – The U.S. Department of Transportation’s Maritime Administration (MARAD) has approved the Port of Morrow’s Project Designation request for the “Port of Morrow Barge Service Extension”. Thirty-four projects have been approved under the Marine Highway Program and the Port of Morrow is only one of three projects on the West Coast.

The new designation allows the Port to pursue additional federal funding for infrastructure improvements needed to make the barge service extension a reality. Expansion of the existing service will leverage the underutilized Marine Highway 85 Columbia and Snake River System to reduce transportation costs, relieve rail and highway congestion through the Columbia Gorge, reduce emissions and fuel use, create jobs, and facilitate the movements of exports.

The Port partnered with many public and private entities on the project proposal. “We are incredibly thankful for the designation from MARAD and would like to thank Senator Merkley, Senator Wyden and Representative Greg Walden for all their support in helping secure this designation,” says Port of Morrow Executive Director Ryan Neal.

“Oregon’s coastal and inland ports support local economies across our state by providing the kinds of great jobs that people can raise their families on, and by making it easier to transport goods to and from our communities and across the world,” says Oregon’s U.S. Senator Jeff Merkley. “I’m glad to have helped secure this Marine Highway Program designation for the Port of Morrow, which will ensure the Port can compete for federal grant funding, help expand shipping and transportation options in the Columbia River System and create many more jobs in the process.”

“I am thrilled to hear that the Port of Morrow has received a Marine Highway Project Designation and can now compete for federal funding to expand barge and other services on the river,” says Representative Greg Walden. “The Columbia River system is a valuable asset for transporting wheat and other products from eastern Oregon to the world. I applaud the Port’s efforts to maximize this resource and I am glad to have worked so closely with them to pursue Marine Highway status. This designation, and the additional funding opportunities, will improve the Port’s capabilities while simultaneously increasing economic opportunity for the region. It will decrease traffic, reduce transportation costs, and bring additional jobs and growth to the area.”