Port of Longview, Oxbo team up on over dimensional cargo 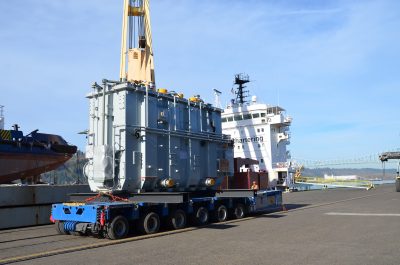 Three 136-metric ton transformers arrived from JSHP Transformers of China aboard the BBC Everest. Stevedoring services were provided alongside one of the Port of Longview’s multiple general cargo docks, with the first of the three transformers discharged directly to truck, while the other two were discharged and staged in the Port’s adjacent 70-acre open laydown yard for future transport.  Heavy hauler Oxbo deployed self-propelled modular trailers (SPMT hydraulic trailers) to position the other two transformers for truck loading, eliminating the need for cranes.

The over-dimensional transformers connected to their destination along the High Wide & Heavy Corridor via Oregon’s Highway 30, Interstates 405 and 84 East, before taking a short leg to each of the substations.

Once on site, Oxbo transloaded the transformers back to the SPMT trailers to be maneuvered into position for a jack-and-slide offloading.

With experienced stevedoring and terminal handling services, robust port infrastructure, and specialized heavy hauling capabilities, this move is a prime example of all the High Wide & Heavy Corridor has to offer customers moving over dimensional cargo throughout the Pacific Northwest and beyond.