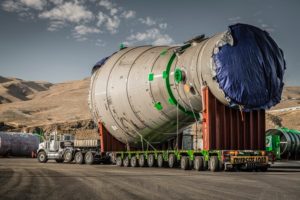 A coalition of Pacific Northwest ports and transportation organizations have raised a war chest of approximately $500,000 to fund a proposed 1,300-mile multimodal high, wide, and heavy transport corridor intended to smooth the transit of energy and infrastructure project cargoes imported from Asia and bound for western North America. Most of these are currently imported via US Gulf ports.

The year-old joint effort has produced a feasibility route study for moving mega-loads of up to 500 tons from Columbia River inland ports to Sweet Grass, Montana, the major port of entry into Canada.

Now the group is gearing up for two critical challenges — finalizing the route and convincing project shippers to break longstanding tradition and switch from shipping via the US Gulf to a Pacific Northwest port and an inland route that could save nearly 1,000 miles on the US-Canada leg alone.

The spiel is enticing: cargo discharged at Pacific Northwest ports is as much as 28 days and 6,209 miles closer to Canadian destinations than cargo shipped through the Panama Canal and discharged at Houston or other Gulf ports. And with fewer permits and permitting days required, the dollar savings in transportation and other logistics costs could reach $5 million per shipment, the new coalition contends.

Founding High, Wide and Heavy Corridor Coalition (HWH) member Alex Strogen, chief commercial officer of Port of Vancouver, Washington, made a presentation in Houston at a recent meeting of the influential Exporters Competitive Maritime Council (ECMC), comprised of 26 shippers, freight forwarders, and logistics and engineering consultants — the who’s who of the energy and infrastructure industry.

A group of California ports, represented by Alex Brett Mascaro, business development manager at the Port of Long Beach, made a similar pitch at the meeting. However, these ports have not banded together like the Pacific Northwest group to develop a dedicated heavy-haul inland corridor.

“We went there to educate shippers on this new gateway,” Strogen, previously a senior logistics executive with General Electric, told JOC.com. “It’s about breaking with tradition. A lot of them have a level of comfort with the southern route [to Canada]. But with the rising cost of vessels, increasing transportation rates, and the complexity of these project cargoes, our gateway can also reduce risk and improve predictability of delivery in addition to saving time and money.” John Amos, secretary of the ECMC and retired head of global logistics for engineering giant Bechtel Corp., agreed the “coalition is really doing its homework. Its inland transportation route is less expensive and transit time is shorter, making for greater time and cost efficiencies.”

However, he said the big hurdle is getting project cargo owners to consider a Pacific Northwest route at the pre-construction logistics planning and bidding stages. “Plus, Houston has had such a grip on project cargo over the years because it is ground zero for oil and gas projects, while the port itself has invested in physical facilities and allocated space to handle heavyweight freight. It’s all there.”

Another obstacle facing the coalition, according to an ECMC meeting attendee who requested anonymity, is that “Gulf shippers have the perception West Coast ports can’t handle project cargoes because they’re too busy handling thousands of containers every day.”

Selling a single Pacific Northwest port’s advantages to project shippers today would be a fool’s errand, HWH members acknowledge. “We’re strategically located where these cargoes want to be, but we have no visibility and Houston has a longstanding transportation corridor,” said Laurie Nelson-Cooley, business development manager for Port of Longview, Washington and a founding member of the coalition. “By working together as a collective team — whether the project comes to [the port of] Vancouver, Longview, or Portland — we all get the awareness, the visibility, and other project owners and developers will see the benefits we offer.”

The proposed HWH corridor would be both land- and water-based. “The barge option is a very attractive element of this cooperative effort,” said Ken O’Hollaren, marine marketing director for the Port of Portland, who adds there is a 465-mile all-water route on the Columbia River from Port of Umatilla, Oregon to Port of Lewiston, Idaho. This multimodality bypasses some permitting, route mitigation, and environmental issues associated with an all-highway route.

An inland river port joined the coalition this year as its eighth member. “We have rail Union Pacific sidings, good connectivity to Interstate 84, and a barge terminal leased to Tidewater, another coalition member,” said Gary Neal, general manager of Port of Morrow in Boardman, Oregon, 165 miles east of Portland on the Columbia River.

He said the port recently applied for a $19 million grant for infrastructure improvements that would allow direct barge-to-rail transloading and eliminate the present shuttle connection between the two modes. Neal contends the corridor effort has created “new cooperation and collaboration between rail, barging, and trucks and that benefits interstate commerce, not just the coalition.”

The role of barges

Historically, Tidewater Barge Lines of Vancouver, Washington, the largest barge operator in the Pacific Northwest with 160 barges and 16 tugboats, has been a small player in the project cargo market, but it ponied up as a founding member of the coalition “because it makes business sense and we can be part of the solution,” said Neil Maunu, director of sales. “We can offload cargoes upwards of 84 feet wide, 300 feet long, and up to 4,000 metric tons on a barge and transit up the Columbia and Snake rivers, all the way to the Idaho border if needed.”

Besides the time and cost savings, Mauna claims barging “gets oversized cargo off congested highways with all their restrictions and takes trucks off the road, which, we believe, can mitigate backlash from environmentalists.” Barging also gives shippers staging options.

Still, the backbone of the coalition is the proposed land-based heavy haul corridor. The goal is to identify a 1,300-mile stretch of roadway that can be navigated through Oregon, Idaho, and Montana without opposition from environmental groups and American Indian tribes.

Moving project cargoes through the western United States has been a lightning rod issue since 2010, when ExxonMobil moved an estimated 200 mega-loads of oil refinery modules and equipment on US Highway 12 in 24 months. US Forestry officials stepped in and won a ban on oversize truck loads from traveling on Highway 12 — connecting Aberdeen, Washington, to Detroit — that stands today.

HWH members are taking a proactive approach in their efforts to win support along the route. The heavy-haul highway makes economic sense for the region and brings economic development along the route, said Waylon Buchan, legislative affairs director for the Oregon Trucking Association, and a founding member of the coalition steering committee. “We are being careful and diplomatic as we approach the municipalities and the seven to 10 tribes in the corridor.”

For example, the coalition will pay municipalities to lift power lines, install different traffic signals, and hire tree trimmers and road pavers as needed, and will collaborate on removing other obstacles, said Buchan.

In a ‘proof of concept study’ of the corridor’s potential, Omega Morgan, a specialty heavy rigging and transportation company based in Oregon, loaded three 16-foot diameter, 96-foot length water purification tanks to barge in Portland, offloaded them in Umatilla, and hauled them in a 385-foot convoy consisting of one prime mover pulling, a suspension beam trailer, and two prime movers pushing through Oregon, Idaho, and Montana to a project site in Fort McMurray, north of Calgary and Edmonton in Alberta. The 1,700-mile move “proved that transporting high, wide, and heavy loads safely and without environmental impact is possible,” said Erik Zander, sales director.

Port of Vancouver’s Strogen said there is a full court press to expand the coalition. He expects to sign up to five new Pacific Northwest members in the next two months. He will also look for support from state departments of transportation. The group is also planning a second high, wide, and heavy corridor from the Pacific Northwest into the Midwestern United States, he said — but that could be two years away.

Meantime, Port of Houston officials aren’t worried about a handful of Pacific Northwest ports and trucking insurgents plotting to hijack their huge flow of project cargoes.

“We are the largest breakbulk port in North America. All the breakbulk ocean carriers have their headquarters in Houston. We have all the engineering and construction firms. We have a monster facilities footprint in the port devoted to breakbulk and general cargoes,” John Moseley, Port of Houston chief commercial officer, told JOC.com. “We have the highest frequency of service from Asia, Europe, Africa. And we have a skilled labor force who know breakbulk and project, eat it, breathe it, smell it, live it every day. They [HWH] have the Rocky Mountains with all those tunnels and bridges built a hundred years ago.”