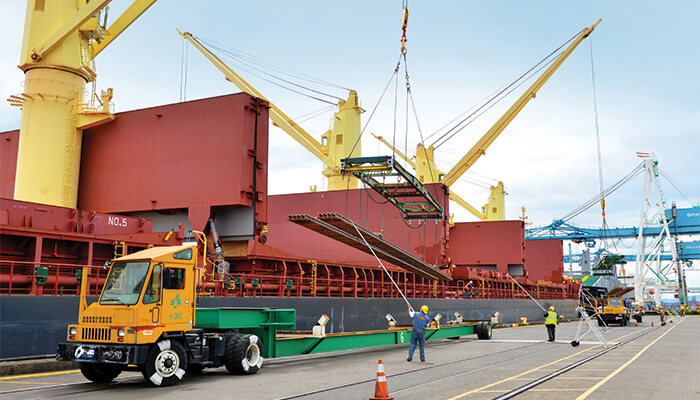 Shippers of breakbulk and project cargoes through the US Pacific Northwest have plenty of choices among ports battling for business in each other’s back yards. “It’s an extremely competitive environment,” said Ken O’Hollaren, marine marketing director at the Port of Portland, Oregon (https://www.joc.com/port-news/us-ports/port-portland-ore), one of more than a half-dozen Pacific Northwest ports that handle breakbulk and project cargoes including machinery, forest products, wind energy cargo, aerospace components, steel, autos, logs, and even live cattle. Competition is not limited to the region. Several Pacific Northwest ports are cooperating to persuade their state transportation departments to approve “high-and-heavy” corridors that would help Pacific Northeast ports compete with Houston and other Gulf ports for project shipments to oil fields in the Canadian province of Alberta. In an up-and-down market for breakbulk shipments, Pacific Northwest ports have seen strong volumes of steel, which importers stockpiled during 2017 to hedge against possible US import restrictions; wind energy components, which enjoy US tax credits that are being phased out; and equipment such as turbines and generators for power plants.

The Northwest Seaport Alliance (https://www.joc.com/port-news/us-ports/northwest-alliance-delivers-operational-financialbenefits_20170412.html) (NWA), the two-year-old entity that united the ports of Seattle and Tacoma, posted a 14 percent year-over-year increase in breakbulk cargo excluding logs during the first 11 months of 2017. Totals through November were 189,846 metric tons for regular breakbulk, and 246,303 tons for logs. NWA terminals’ breakbulk volume includes construction materials, mill assembly parts and equipment, pulp and paper, steel, steel tanks, transformers, generators, and wind energy components. The NWA handles breakbulk cargo at Seattle’s Terminal 5, which the NWA plans to return to its previous use as a container terminal, and at three terminals at Tacoma, or South Harbor. Tong Zhu, commercial leader at NWA, said the port complex has ample space for expansion and sees opportunities to expand its breakbulk and project business. “We are well known to be a container gateway. We’re less well known as a breakbulk and project gateway,” she said. In Oregon, the Port of Portland is marketing its Terminal 6 as a combination container-breakbulk facility. The terminal’s container business collapsed after labor slowdowns during a bitter jurisdictional dispute involving the International Longshore and Warehouse Union. This month, Swire Shipping began calling the terminal with a hybrid container-breakbulk service that will operate on a triangular route, carrying mostly non-containerized cargo from Portland to Australia and New Zealand, and containers and breakbulk cargoes including steel from China and South Korea to Portland.

The new service’s base export cargo will be trucks manufactured in Oregon by Daimler Trucks North America (https://www.joc.com/trucking-logistics/trucking-equipment/daimler-trucks/zonar daimler-partner-build-smart-truck-smarter-supplychains_20150702.html). Port officials hope the service will rejuvenate the fortunes of Terminal 6, which O’Hollaren said will be marketed as a mixed-use terminal. Portland’s Terminal 2, a traditional breakbulk facility, handled large quantities of steel rail until importers switched to 480-foot rail sections too long to handle at the terminal. Those rails now move through Stockton, California. O’Hollaren said the port expects to resume handling rails in shorter sections during the second quarter of this year. Nearby Port of Vancouver, Washington, hopes during the first half of this year to conclude agreements with companies that would use part of a 90-acre site at the port’s Terminal 5 for breakbulk exports, said Heinz Lange, the port’s sales director. Vancouver’s diversified cargo mix includes steel, wood pulp, wind energy, and project cargo in addition to bulk commodities dominated by grain. The port handled a record 65,300 railcars in 2017, and early this year will complete the last key elements of a 10-year, $250 million rail expansion. The West Vancouver Freight Access project will increase the port’s annual rail capacity to 400,000 railcars a year from 55,000 a decade ago and has tripled Vancouver’s port-owned rail track to 51 miles. Like other steel-handling ports, Vancouver had a surge in imports last year as buyers padded inventories to hedge against possible import restrictions. Wind energy imports through the port also have been strong during the first two years of a five-year US tax credit program. To handle wind cargoes and other heavy-lifts, the port has two 140-ton mobile cranes that can lift 210 tons in tandem.

The Port of Everett, Washington (https://www.joc.com/port-news/us-ports/rebuilt-everett-dock-aid-boeing-supplychain_20171228.html), best known for its handling of components for a nearby Boeing aircraft plant, plans this year to lengthen its South Terminal to handle larger ships, and to double the terminal’s load-bearing capacity to 1,000 pounds per square inch in order to handle heavier breakbulk loads for Boeing and other customers. The $50 million project, the largest in the port’s history, also includes two recently completed rail spurs totaling 2,500 feet of rail track and relocation of a 40,000-square foot shed from the wharf to the rail line. In May 2015, the port completed a 140-by-110-foot heavy-lift pad, rated at 1,000 psi, on the terminal’s north end. The rebuilt docks will be equipped with 100-foot-gauge rails for container gantry cranes. The port has been exploring the purchase of two used cranes from Seattle for installation at the terminal. The port’s nearby Pacific Terminal has two gantry cranes with 50-foot gauge. Other cranes at the port include two mobile cranes that have separate capacities of 100 and 150 tons, and tandem lifting capacity of 185 tons. In addition to containerized cargo, Boeing uses the port for breakbulk shipments of all oversize shipments for its 747, 767, and 777 aircraft. The port expects to handle more of these larger pieces when production starts on Boeing’s new 777X aircraft. Other breakbulk cargoes at Everett include electrical transformer, pipes, construction machinery and supplies, mining equipment, oil and gas and wind power equipment, and logs.

The Port of Longview, Washington, handles a range of breakbulk and project cargoes, including transformers, wind energy, and industrial machinery. During the last two years, Longview handled five unit trains of wind energy equipment with blades as long as 177 feet. During the next decade, the port plans to increase its number of rail tracks from two to nine tracks that can handle 8,500-foot unit trains. The $62 million project is being developed in phases. Laurie Nelson-Cooley, the port’s manager of business development, said Vancouver’s project activity has slowed with the deceleration of oil and gas drilling in western Canada’s oil sands. Much of the high-and-heavy oil field equipment moving to the region now moves via Houston. Longview is among ports urging transportation officials in in Pacific Northwest states to approve heavy-haul corridors that will make it easier for oversize shipments to move via the region’s ports instead of going via the Panama Canal and Gulf ports. “We want to be prepared so that when demand does come back, we can tell an EPC [engineering, procurement, and construction company] or an oil company that we have a route that will work for them,” Nelson-Cooley said. Logs are exported to Asia in large volumes from several Pacific Northwest ports, including Longview, Tacoma, Olympia, and, Grays Harbor, Washington.

Olympia has developed a unique specialty — exports of dairy cows. Last year, 3,800 heifers were exported from the port on multiple voyages by a specialized ship equipped with a desalinator, special ventilators, and other features. Faucher said the port is looking forward to continued shipment of dairy cows to Vietnam, where the government is encouraging milk production. “I’m bullish on cattle,” he said.

About the Author: Dan Klimke